What tests are suggested for the diagnosis of liver disease? 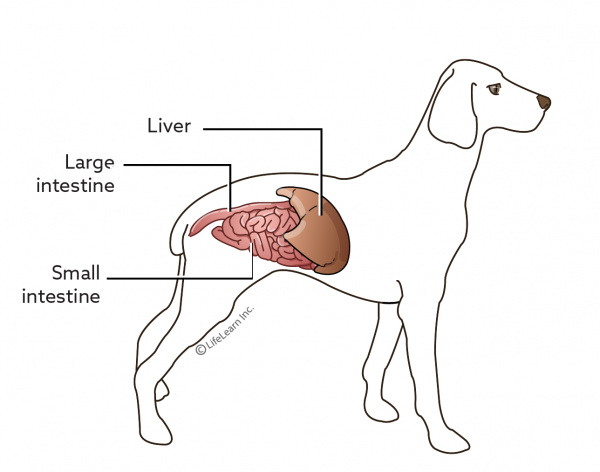 Generally, the following screening tests are recommended when liver disease is suspected in a pet: a complete blood count (CBC), a serum biochemical profile, and a urinalysis.

What might these tests indicate if my pet has liver disease?

These screening tests may support the presence of liver disease or a reduction in the functional capacity of the liver but they are not necessarily specific for liver disease.

The complete blood count (CBC) involves the evaluation of the red blood cells, the white blood cells, and the platelet components of a blood sample. A hematology (blood) analyzer will provide your veterinarian with the total numbers of these cells, and evaluation of a blood smear will allow your veterinarian to look at the physical characteristics of these cells.

"One of the most dramatic features of liver disease is icterus, which is the accumulation of a yellow pigment in the blood and tissues."

One of the most dramatic features of liver disease is icterus, which is the accumulation of a yellow pigment in the blood and tissues. Icterus is recognized as jaundice, which is seen as a yellow discoloration to the skin, mucous membranes, or sclera (whites of the eyes). In addition to being a feature of liver disease, icterus can occur due to the destruction of red blood cells (a condition known as hemolysis). Obviously, it is important to try to differentiate between these two causes of icterus. 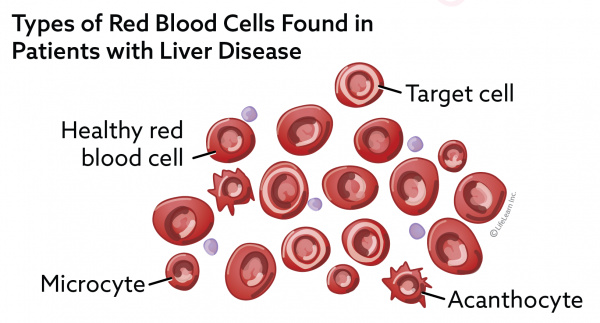 The CBC may indicate the presence of inflammation or infection characterized by an increase in the number of white blood cells.

The serum biochemistry profile requires a separate blood sample, from which the serum (the liquid portion of blood) is separated from the cellular portion of blood. Serum contains many substances including enzymes, proteins, lipids (fats), glucose (sugar), and metabolic waste products.

"The biochemistry profile contains many tests that are helpful in the diagnosis of liver disease."

The most useful enzymes to measure with suspected liver disease include:

ALT (alanine aminotransferase). This enzyme is found within individual liver cells. When liver cells are damaged for any reason, an increased amount of the ALT enzyme is released into the blood stream. This increase can be detected in a serum sample. Drugs, including corticosteroids and phenobarbital, may increase ALT values.

ALP (alkaline phosphatase). These are a group of enzymes found on the membranes (outer lining) of liver cells and cells of the bile ducts (the bile ducts carry bile from the liver to the intestine). Liver conditions that result in obstruction of bile flow (termed cholestasis) may result in increased serum ALP concentrations. Other causes of increased serum ALP concentrations include certain drug therapies (especially steroids and anticonvulsants), and some conditions related to skeletal bones.

"In young, rapidly growing dogs, it is normal to see elevations in serum ALP."

GGT (gamma-glutamyltransferase). GGT is an enzyme associated with the membranes of cells from the bile ducts, as well as the membranes of cells from the pancreas and kidneys. Increased GGT production, and therefore increased serum concentrations of GGT, are found in liver conditions that result in cholestasis (impaired bile flow), especially those conditions resulting in increased growth or proliferation of bile ducts. Steroid containing drugs may also increase serum GGT concentrations.

Serum albumin, glucose, urea, and cholesterol determinations. The liver manufactures thousands of substances. Glucose, urea, cholesterol, and albumin are among those substances made by the liver that are routinely measured in a serum biochemistry profile. If there is a severe decrease in liver function, this may be reflected by a decrease in one or more of these substances.

Urinalysis. The kidneys constantly filter the blood to remove toxins and other wastes, and concentrate these extracted materials in the urine. Therefore, we may occasionally see changes in the urinalysis before significant changes are noted with blood testing.

"An increase in the amount of bilirubin in a urine sample may indicate liver disease that is not yet appreciable on a serum biochemistry profile."

An increase in the amount of bilirubin in a urine sample may indicate liver disease that is not yet appreciable on a serum biochemistry profile. The presence of specific crystals in urine such as bilirubin crystals or ammonium biurate crystals may also point to underlying liver disease.

Are the serum biochemistry tests always abnormal with liver disease?

No, unfortunately not. Occasionally we may suspect liver disease because of the clinical signs that your pet is exhibiting but any changes on the screening test may be subtle or non-existent.

What other tests are available to us for the diagnosis of liver disease?

Serum bile acid concentrations are used to evaluate the functional capacity of your pet's liver.

If the liver is functioning normally, the amount of bile acids in both the fasted and post-feeding serum sample will be low.

If liver function is reduced for any reason, the concentration of bile acids in circulation may be increased either in the post- feeding sample or possibly in both samples. Occasionally the difference between the fasting and post-feeding samples may suggest specific disease processes. Usually, increases, especially in the post-feeding samples, only provide further evidence of liver disease. See handout “Bile Acid Tests” for more information.

Are there any tests that will tell me exactly what kind of liver disease my pet has? 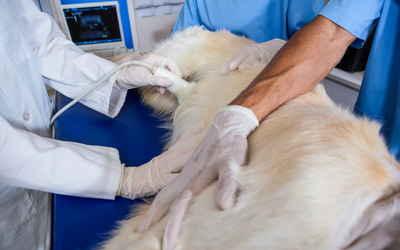 Occasionally the combination of these screening tests and a through clinical history and physical examination will suggest a likely cause to the liver disease.

"Testing may include ultrasound examination of the liver and gall bladder."

However, in most instances further testing is required. This testing may include ultrasound examination of the liver and gall bladder. During this examination, the ultrasonographer may take samples of any free fluid that is detected in the abdominal cavity, may take a biopsy sample, or a fine needle aspiration biopsy of the liver and/or gall bladder if abnormalities are observed. Since the liver produces the proteins involved in blood clotting, it is necessary to determine the amount and functional activity of these proteins before proceeding with any biopsies.

A sample of aspirated material from the gall bladder or liver may be submitted for culture if it is suspected that an infection is causing the liver disease. If there is reason to suspect leptospirosis, a blood sample may be submitted to determine a leptospirosis titre (see handout “Antibody Titers” for further information).

If these other tests are needed to determine what kind of liver disease is present, why bother with the screening tests at all?

Secondly, these tests will allow your veterinarian to monitor how your pet is responding any treatments that are undertaken. Normalization of liver enzymes is a good indicator of response to treatment.