Testing and Monitoring in Addison’s Disease

What is Addison's disease? 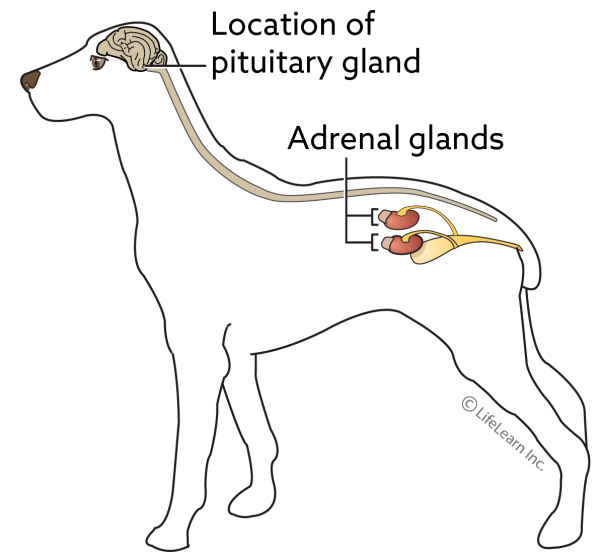 Addison's disease (also known as hypoadrenocorticism) is caused by a decreased production of two hormones from the adrenal gland. These hormones are cortisol, a stress hormone, and aldosterone, a mineralocorticoid hormone that controls the body's water balance through its effects on sodium and potassium.

In humans, Addison's disease is usually caused by immune-mediated destruction of the adrenal glands (called primary hypoadrenocorticism). The immune system wrongly recognizes the gland tissue as "foreign" and destroys it as it would destroy a virus. This is also thought to be the main cause of Addison's disease in dogs. Less common causes of damage to the adrenal glands include trauma, bleeding, or infection. Regardless of the cause of adrenal gland destruction, the levels of cortisol and aldosterone will be decreased, resulting in illness.

If a dog receives corticosteroid-containing medications such as prednisone over a prolonged period, the normal production of cortisol by the adrenal glands is reduced. If this medication is withdrawn rapidly, the adrenal glands will not be prepared to suddenly resume cortisol production. Therefore, a temporary condition similar to Addison's disease may result.

What tests are used to diagnose Addison's disease? 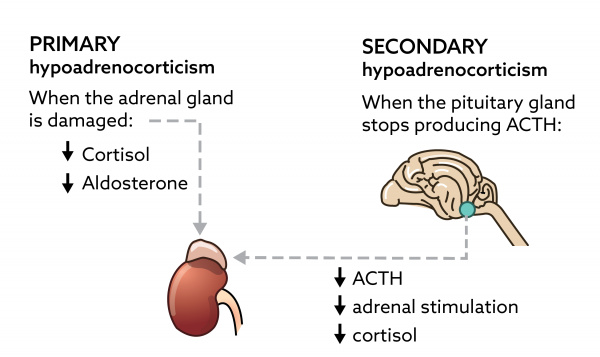 What can these screening tests indicate?

A) Complete Blood Count (CBC). This is a simple blood test that provides information about the different cell types in blood. These include the red blood cells, which carry oxygen to the tissues, white blood cells, which fight infection and respond to inflammation, and platelets, which help the blood to clot. Occasionally a mild anemia (low red blood cell count) is noted with Addison's disease, as cortisol is required for optimal red blood cell production by the bone marrow.

B) Serum Biochemistry Profile. Serum (the liquid portion of blood) contains enzymes, proteins, lipids (fats), glucose (sugar) and metabolites. These serum components are derived from different organs such as the liver, kidney, and pancreas and their measurement can give an indication of the function of these organs.

Changes seen with Addison's disease are usually related to the lack of hormonal (cortisol and aldosterone) effects on organs, rather than actual organ damage. Since cortisol is required for maintenance of proper serum glucose (blood sugar) concentrations, cortisol deficiency may result in hypoglycemia (low blood sugar).

Aldosterone regulates the body's fluid balance by its effects on sodium and potassium. A lack of aldosterone may be reflected by changes in the amount of sodium and potassium in the serum causing an abnormal sodium:potassium ratio, and by a decrease in total body fluid. This decreased body fluid makes it difficult for the kidneys to rid the body of waste products. An increase in kidney values, such as blood urea nitrogen and creatinine may be seen in the serum.

C) Urinalysis. The decrease in total body fluid related to Addison's disease cannot be measured directly but can be estimated by the concentration of urine that an animal produces. A special instrument called a refractometer is used to evaluate the concentration of the urine. The kidneys generally produce concentrated urine when water is less available.

Because of the multiple effects of cortisol and aldosterone on body organs, the changes outlined above are not specific for Addison's disease but may also be seen with dysfunction of other organs. Therefore, if a pattern of changes supportive of Addison's disease is found, diagnosis will need to be confirmed using a specific diagnostic test, called the ACTH stimulation test.

How does the ACTH stimulation test work?

ACTH is a hormone naturally produced by the pituitary gland (located in the brain). The purpose of ACTH is to tell the adrenal glands when and how much cortisol to produce.

The ACTH stimulation test mimics this natural stimulatory pathway and demonstrates the ability of the pet's adrenal glands to produce cortisol in response to an injection of synthetic ACTH.

This test requires two blood samples taken approximately 1-2 hours apart. The first blood sample is taken prior to injecting synthetic ACTH (Cortrosyn™ or Synacthen®), and the second sample is taken 1-2 hours following the injection. Cortisol levels in the two samples are measured and compared to assess the response.

What do we expect to see if the patient has Addison's disease?

Regardless of the underlying cause of Addison's disease, the results of the ACTH stimulation test are similar.

Why would my veterinarian ask to check a resting cortisol level prior to running an ACTH stimulation test?

How the cause of Addison's disease be differentiated?

A thorough review of all medications that your pet has been receiving (both oral and topical formulations) is essential. If your pet has received medications containing corticosteroids that are suddenly stopped, he may have a temporary Addisonian condition that only requires treatment for a short time.

If your pet has been treated for hyperadrenocorticism (Cushing's disease), the adrenal glands may become incapable of producing cortisol and aldosterone. This condition is permanent and your pet will require treatment for his lifetime.

Most cases of Addison's disease that are not related to the effects of medication are caused by immune-mediated destruction of the adrenal glands. As the function of these glands decreases, the amount of cortisol in the blood also decreases. Decreased blood cortisol levels prompts the normal pituitary gland to secrete more stimulating hormone (ACTH) in an attempt to 'beef up' cortisol production. Over time, this effort becomes futile, but an increased blood ACTH concentration can be measured. The amount of this endogenous ACTH is typically increased in dogs with Addison's disease due to adrenal gland disease. Conversely, with cases of Addison's disease due to lack of production of ACTH by the pituitary gland, the endogenous ACTH concentration will be decreased.

Since both cortisol and aldosterone hormones are usually decreased with Addison's disease, do we need to measure aldosterone as well?

Studies have shown that measuring aldosterone concentrations does not reliably differentiate the different causes of Addison's disease. Therefore it is rarely indicated.